Yesterday I bought another WRT54G from local store. After heavy bargaining and bluffing, I got it for $78. Now that I have 2 WRTs, I can put one at home for normal AP and one inside my car for “anything else”. Nice plan, huh?

From the outside box, there is no different between the new WRT and the one that I purchased couple of months ago. But after I removed it out from the box and read the version number on the back, it’s written “WRT54G v2.2”. My first WRT is v2.0.
I checked the box again and there is nothing at all that can give me a clue about the version of the device inside. Only I notice WRT54G v2.2 has serial number started from CDF7xxx while v2.0 has serial number CDF5xxx. But I’m not 100% sure.

Anyway, from our best friend Google I found out that there are currently 4 versions of WRT54G in the market:
v1.0, v1.1, v2.0 and v2.2.
Read the nice presentation from Neal Dudley here. It contains the pictures of all versions of WRT54G from external and internal view.

According to Simon in Linksysinfo forum, until now only the latest HyperWRT firmware and official firmware from Linksys can be used to flash v2.2. From somewhere I read that v2.2 actually uses the same Broadcom chipset, but now the LAN ports controller is part of the chipset.
Quick check from cpuinfo output confirms that both 2.0 and 2.2 versions are using the same chipset:
(none):[~]# cat /proc/cpuinfo
system type : Broadcom BCM947XX
processor : 0
cpu model : BCM3302 V0.7
BogoMIPS : 199.47

So now I’m stuck with WRT54G v2.2 and I can’t use my favorite Sveasoft Satori to flash the router. Should I use the new WRT as normal AP and the previous 2.0 as my mobile scanner? Well, I don’t like to spend 78 bucks only to get normal AP, so I downloaded the latest HyperWRT firmware and upgraded my new router.
Everything looks good. Now I have the option to increase the transmit power to 84 mW and I like the idea to put “reboot” button on the web interface. However, SSH is not available by default, only telnet. The good thing about HyperWRT is it has an option to modify the startup script. I put telnet command and “route add default gw 10.1.1.1” in startup script to make sure both will be available even I reboot the router. I don’t understand why there is no option to put default gateway for LAN interface on the web interface, even though I can achieve the same thing by putting the mentioned route command in startup script.

How about Kismet? Well, since there is no SSH, I have to run wget to get the kismet drone binary and config files. It consumes more effort since now I have to setup a web server with all the files. Sure it’s a linux system, honey. So I should be able to install any packages, right? The problem is the file system of HyperWRT is mounted as read only. We can write new files in /tmp directory only. And as you may guest, all these new files will go away once we reboot the router.

So I decide to try with “unofficial” Sveasoft Alchemy firmware which can be downloaded from freeWRT site. Hey listen, I don’t mind to pay $20 annually but I can’t pay with Paypal. I have sent Sveasoft support an email and requested to let me pay through other way.

The reason why I love Sveasoft software is because they build feature-rich firmware. I’m using Alchemy 6 Mod v16 and I can see there is an option to mount SMB file system. I haven’t tried to mount any drives yet but I believe it rocks!!!

How about the performance? I see that I can boost the power to 251 mW. Hmm, doesn’t it sound so tendentious?
So I run netstumbler to verify. I put one Linksys in Channel 1 and the other in Channel 11. WRT54G v2.0 running Satori is on channel 1 with 28 mW Xmit power and the result can be seen below: 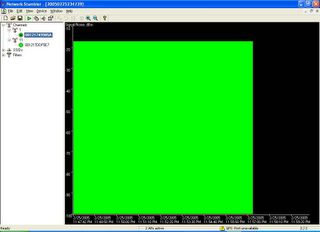 As we can see, the performance is constant in one point. Then I compare with WRT54G v2.2 running Alchemy on channel 11 with maximum 251 mW: 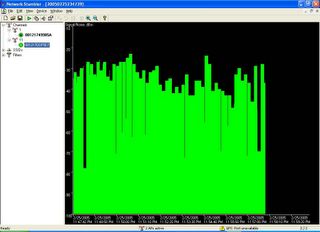 Well, the picture has spoken. The performance of Alchemy is not as stable as Satori. And even when I use WRT v2.2 Alchemy as normal AP, my laptop got disconnected several times.

I need to run more test to double check. But I believe I have already made my mind: Satori will stay at home and Alchemy will get the honour to be in my car. Unless it’s proven that I can’t use Alchemy to even run stable Kismet off course.

Is it true that we can use only HyperWRT and Sveasoft Alchemy for WRT54G v2.2? Some people say even you don’t turn the router into blue colored brick, there is a chance to lose the LAN ports if the firmware we use is not compatible with the new LAN controller chipset. Then you can re-flash the firmware only from the wireless network.

I would like to try it by myself, but not tonight.
OpenBSD Layer 2 bridging firewall has been waiting.
If you like to read the e-mail from Sveasoft to Google regarding the copyright violation by FreeWRT site, please check out this link. For me, I prefer to subscribe and get the firmware officially.
The decision is yours.
Posted by Himawan Nugroho at 11:51 PM