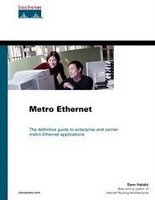 I have just passed the CCIE Service Provider – Metro Ethernet written exam today. Half of the questions were about general networking concept and routing switching stuff, while the other half focused on Layer 2 VPN technology: pseudowire, VPLS, AToM, Interworking, Local Switching etc. It took me less than an hour to complete the test and I don't bother about the score because I just want to pass.

Following is the material I used to study:
Halabi’s Metro Ethernet book
Layer 2 VPN Architecture by Wei Luo etc
Re-read Ivan’s MPLS VPN book
This is not required, but I read some chapters from Osborne’s Traffic Engineering (TE chapter from Halabi book is enough for the exam)
And definetely my favorite resource: Networkers Online presentation. I love the L2VPN troubleshooting session with Dmitry Bokotey.

For me, passing CCIE written doesn’t mean anything except makes me eligible to register for the lab. I have mentioned in one of the points in How to Become CCIE: studying written won’t help much in real lab. The reason is because the coverage in written exam is different with the lab.
Metro Ethernet exam focuses on Layer 2 VPN, while the lab focuses on MPLS VPN, MP BGP, TE, multicast, QOS and Security in Service Provider environment, and normal routing switching stuff.
According to Tong Ma, CCIE SP lab proctor in San Jose, and Vincent Zhou, the CCIE SP Program manager, there is no lab in the world that has 7200 routers to test Layer 2 VPN. IOS 12.0 S is required to deploy L2VPN and this code can run only on 7000 series router and higher. So it’s coming, they said, but until all the lab hardware has been upgraded, L2VPN won’t be tested.

I’m planning to become Triple CCIE when I’m still 30.
So it means I have only 10 months left.
It's time to get dirty again.
Posted by Himawan Nugroho at 11:22 PM

congrats bro.. i want to take ccna.. i just want to know,what i must study to make sure i pass ccna??

erm..can u give me a tutorial for gns3??

Congratulation man and for more IT certification than try this site.
MCSE