I have just arrived in Bratislava. For those who are too lazy to open the google map, it's the capital city of Slovakia, one country in eastern Europe. This afternoon I was still in Munich where I spent 3 days to attend several meetings with my new team and the other WWSP teams who cover the same Europe and Emerging Markets (EUEM) but for different technologies. Finally I had a chance to meet my new boss in person, meet his boss, introduce my self and meet half of my team members, and to learn and understand more about one of the Cisco AS organizations that I joined about a month ago.

So I work for World Wide Service Provider Carrier Ethernet practice team. We focus on solution and technology that involve the products related to end-to-end carrier ethernet network. That means it can be the whole solution or portion of it from core network where CRS-1 is taking the main role, multi-service aggregation network, user facing aggregation, to access layer until the last mile technology such as DSL or Wimax. And we don't only lead the deployment in this technology but we also have to write leading practice documents afterward to share our experience and ensure the knowledge gained can be replicated in other projects within our team, by another team and even a bigger community.

The best moment for me is when I realized that I work for a team who not only responsible to lead carrier ethernet deployment for EUEM area, but we also have global responsibility in our technology focus since there is only one carrier ethernet practice team in the whole Cisco organization. That is actually really cool, well, at least for me. Finally I'm in the spotlight just as what I have always wanted to.

There were lots of meetings and discussion and I heard some guys mentioned about the following quotes that I think they are really good so I put them here:

- During the discussion about mobility

We don't "go" to work anymore, we work

- During the discussion about workload

We are all burned out from work, but the tolerance from each person is the one that makes the difference

- During the discussion about work-life balance

- During the discussion about inventing new solution

Then there were two quotes that I personally made during the night when I had a chance to go to Oktoberfest:

Those two, of course, can be safely ignored :) 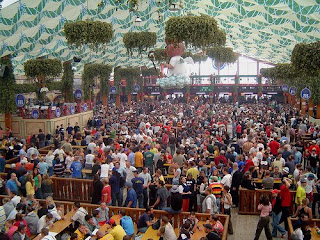 I am very glad know that you work for World Wide Service Provider Carrier Ethernet practice team.Its great.we meet this team few months ago for our business mater.remember my company will arrange a meeting for his work in Bratislava.Its a very nice place.my company was arrange sound delicious breakfast & lunch to a little restaurant in Bratislava.I never forget those days.